Griffin Haskins: Building a Strong Community for the New Economy of Movement

By Kelly Clark and Grace Pulliam

Griffin: I got started with blockchain in Fall 2016 when I joined Blockchain at Berkeley, which at that time had just begun as a reformation of the Berkeley Bitcoin Association. There, I focused on consulting, eventually becoming a Co-Head of Consulting in my fourth year. My teams were primarily focused on solving enterprise problems with blockchain, building blockchain proof-of-concepts for Qualcomm, Exxon Mobil, BMW, and others. Separately from Blockchain at Berkeley, I consulted privately with new blockchain startups, helping them develop their tokenomics, business models, and other areas, helping them go on to later raise over $20m collectively. Finally, I began working as an analyst for SVBS, where I helped the team evaluate new blockchain projects and other opportunities. I graduated from University of California, Berkeley in 2019 with a degree in Applied Math in Finance, after which I began working at MOBI in August 2019.

2. How did you end up joining MOBI? What can you tell me about your role as Partnerships Manager?

Blockchain at Berkeley enjoyed a close relationship with MOBI when MOBI was launched, and I was initially connected with Chris [Ballinger, MOBI Co-director and Founder] within the context of coordinating collaboration between the two organizations. Even then, I was very excited about MOBI, as I had grown increasingly aware of the need for standardization in the space. After graduating, a close friend reconnected me with MOBI, and I joined shortly thereafter.

I’ve always had a fairly dynamic role at MOBI. As Partnerships Manager, I have responsibilities and provide input in most aspects of MOBI’s external engagements. Firstly, I am often the initial point of contact for companies that are interested in joining MOBI, and I help guide them through onboarding should they choose to join. I also do outreach work in this capacity. Secondly, I’m a fellow for several of our Working Groups, where I carry out research tasks, create working group materials, and administratively coordinate the members within the working group. Finally, I’m a technical writer for MOBI, where I help draft technical standards, whitepapers, and governmental/private grant proposals. 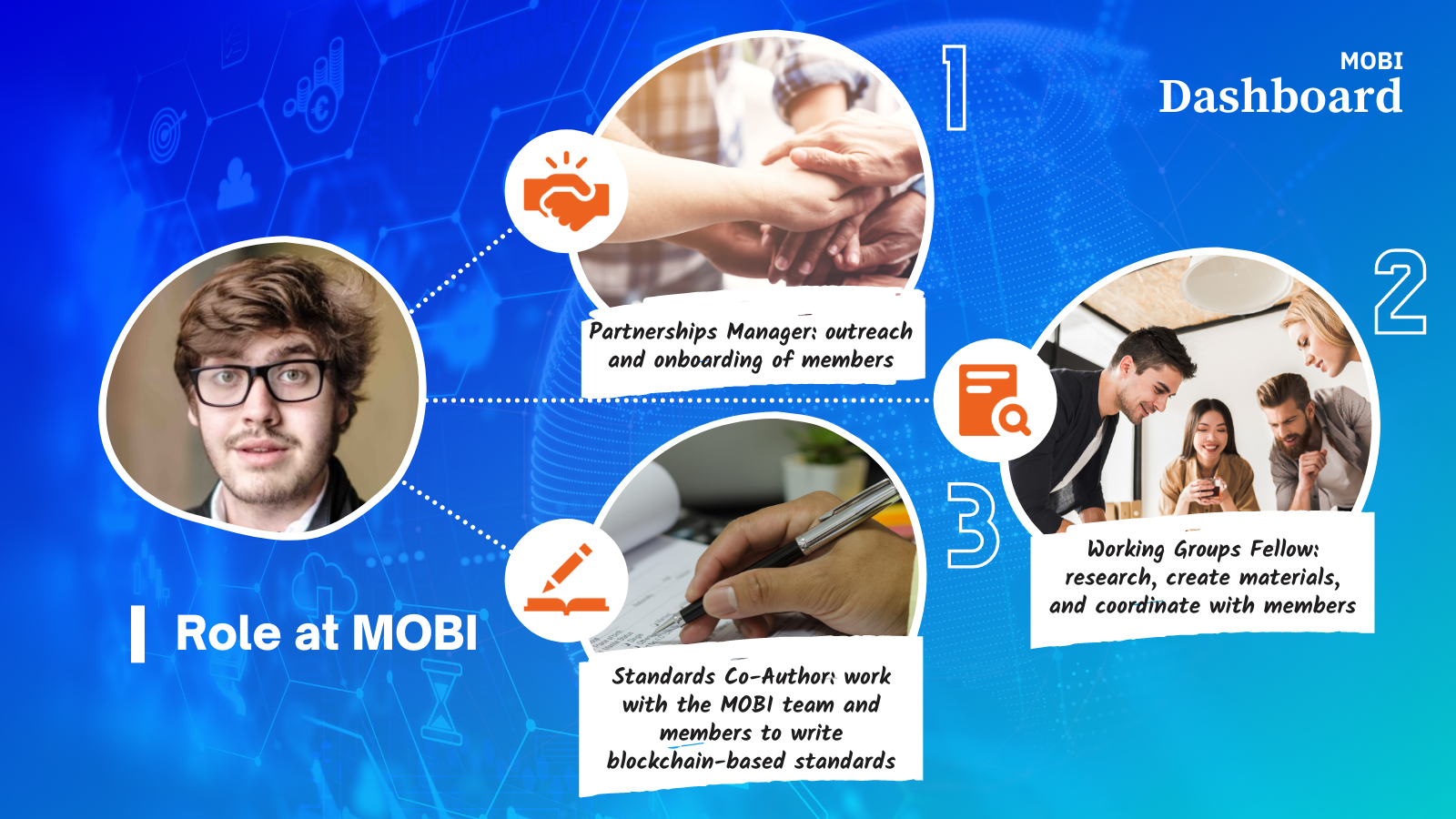 3. What experiences or interests led you to get your degree in Applied Mathematics and Finance? How do applied math and finance relate to what you do at MOBI?

I actually spent my K-12 education being, at best, an average math student. It was only once I was in college and had to take math classes for my intended major (initially Economics) that I realized math was far more interesting than what I’d thought growing up. When I stopped looking at math as increasingly complex arithmetic and started instead seeing it as the study of structure, quantity, space, and logical consequence, I became passionate, and ultimately changed my major almost halfway through college. I think that if we emphasized more of the latter in early education, we might see an increase in interest.

Of course, at MOBI, I’m not asked to write proofs or complete problem sets. That said, a mathematics background is really quite impactful for my work. For example, it empowered me to read and grasp technical concepts, concretely define and discuss abstract concepts, and meaningfully contribute to technical efforts like standards development. But, most importantly, studying mathematics vastly improves one’s ability to think and problem solve, and that’s impacted me in every aspect of my life, beyond coding or technical research.

4. You contributed to recently released Connected Mobility Data Marketplace (CMDM) and Finance, Securitization, and Smart Contracts (FSSC) standards as well as last year’s Electric Vehicle Grid Integration (EVGI) Standards. What can you tell me about how these working groups support MOBI’s mission and fit into new initiatives such as DRIVES and MOBI Trusted Trip?

The key here is to look at the totality of what these standards seek to accomplish. We’re looking to enable any entity (person, organization, vehicle, device, part, etc.) to be able to easily and securely share data with each other in a privacy preserving manner, with the necessary shared functionality guaranteed, allowing for the coordination and execution of shared multiparty business processes. These capabilities are called data interoperability and functional interoperability; both are difficult to achieve at scale. All of the Working Groups I participated in as a Fellow (as well as the Working Groups where I didn’t) play a role here. There are two overarching “components” to the CMDM, FSSC, and EVGI Standards – sections that define necessary shared functionality and sections that lay out schemas for the data involved in the use cases of interest. Together, these are how MOBI Standards enable both data and functional interoperability. 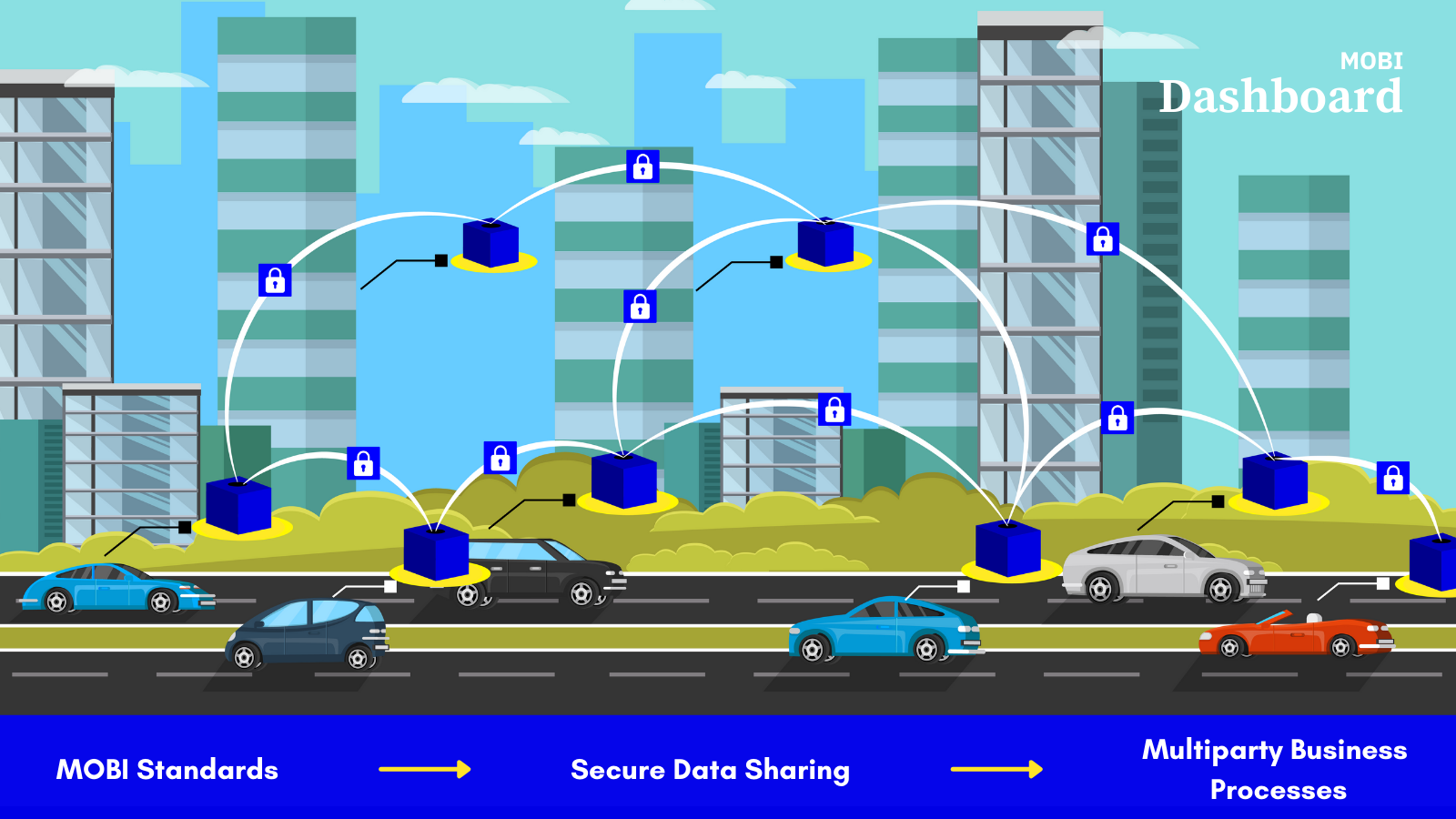 For DRIVES, all of these standards are coming into use. Each use case involved in DRIVES relies on the same underlying shared functionality – these are the mobiNET core services defined by the aggregate of all MOBI Standards. Each use case also requires the secure, privacy-preserving exchange of data, which is structured and named according to the schemas defined by these Standards. Similarly, for the Trusted Trip, these Standards play a key role in defining the mobiNET core services and naming/structure of data required for constructing Trusted Trip records. 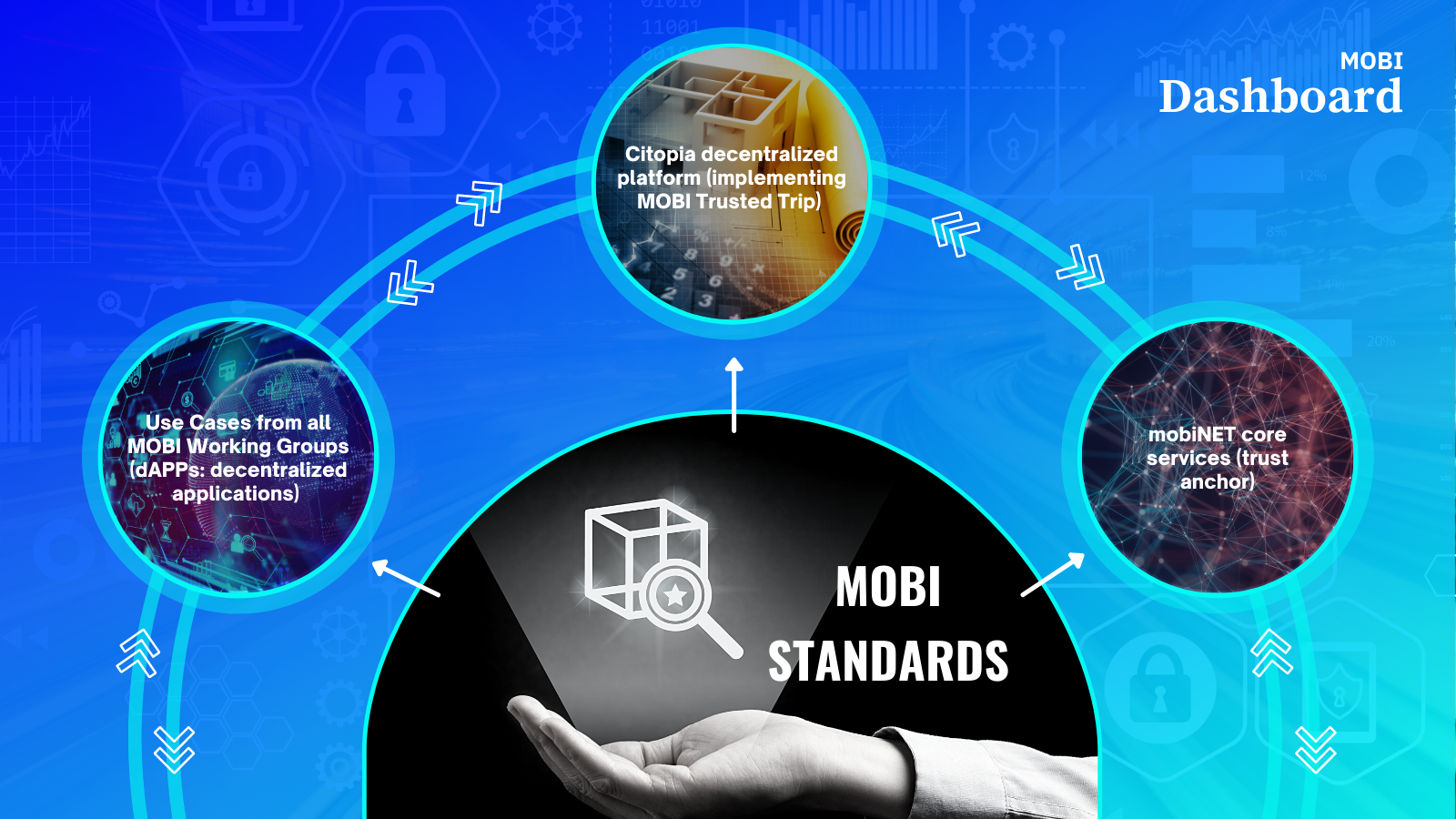 5. You lead partnerships. Why is building a strong community important to building the New Economy of Movement? How do our members work together to accomplish MOBI initiatives?

MOBI was launched out of conversations that began in 2016-2017 between many large automakers, consultancies, university labs, and other organizations, all of whom were carrying out blockchain proof of concepts (PoC s) at the time. Interestingly, most of those PoCs were ostensibly a success – the technology generally worked. But, at the end of the day, most of those PoCs did not translate to a widely used application or service at scale. Instead, the process of “PoC to Pilot to Production” would often halt at the end of that first step. The conversations quickly began to focus on this and understanding why this was so.

The result of those conversations was the collective realization that the reason for this “halting” was that all of these companies were largely doing this work by themselves. These are large companies with ample resources, so why are they unable to address this alone? Because blockchains are useful for coordinating multiparty applications between semi-trusted to untrusted parties. Multiparty processes definitionally require multiple parties. These conversations resulted in the collective realization that the hard problem was not making the technology work, but rather building a community of organizations to run nodes and be on the other sides of these multiparty applications. 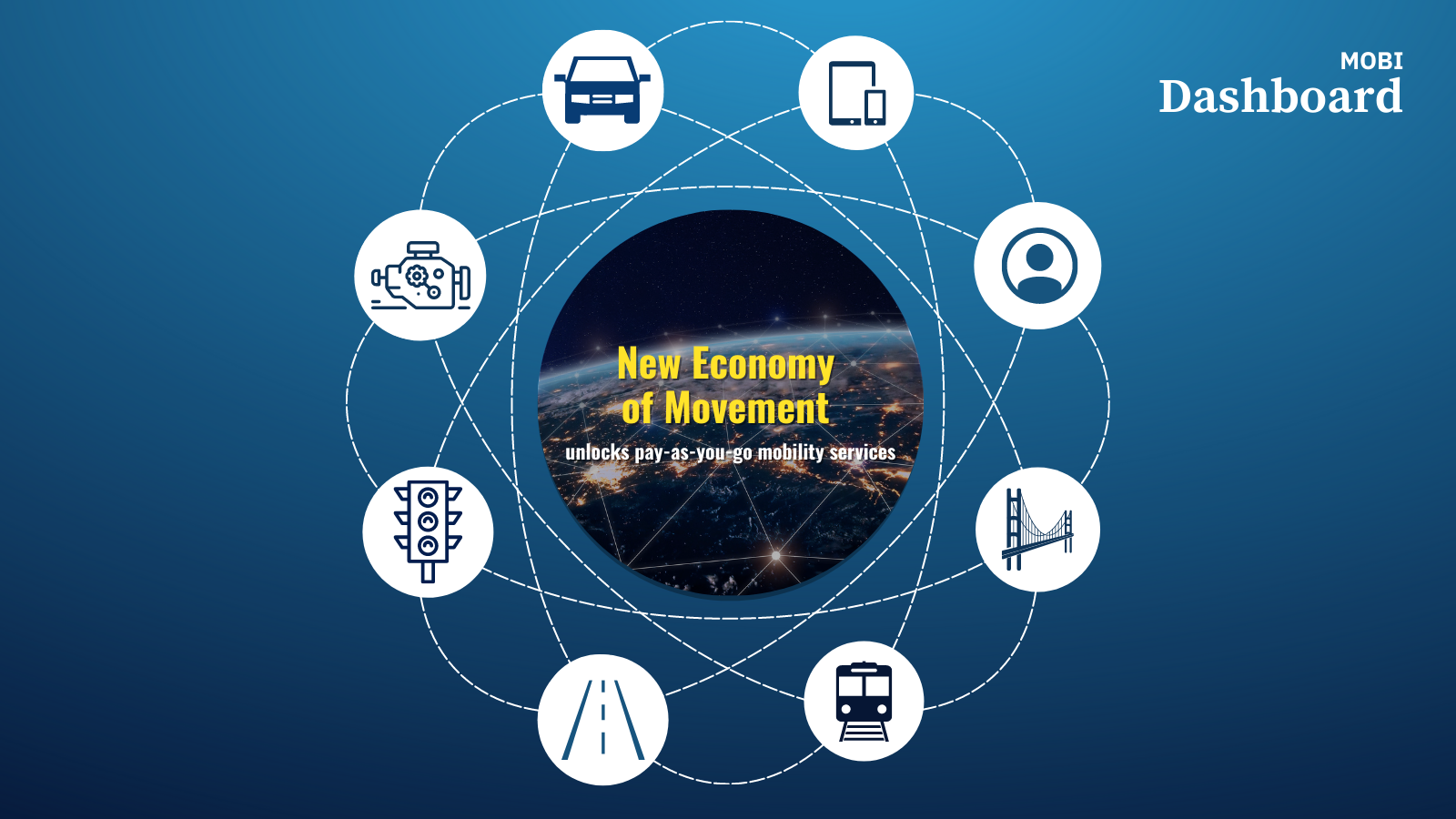 This motivated the launch of MOBI, where our members have access to the community necessary to define shared standards and build shared multiparty applications. Our members collectively define MOBI priorities and work to accomplish them within MOBI-coordinated Working Groups.