Autonomous vehicles (AVs) are often portrayed charting an inevitable pathway towards transformative roadway system efficiency and safety. However, current AVs are designed to operate within (and limited by) a legacy system of laws, liabilities, licensing, taxation, control systems and normative behaviors built on the assumption that vehicles will have human drivers.

In other words, even if an AV may be able to go faster, corner more tightly or safely maneuver around obstacles with a margin of error much smaller than human drivers, they must remain restricted, for now, to maneuvers expected from a human-driven vehicle for two key reasons. First, deviation from legacy norms would disrupt nearby human drivers; second, current AVs are simply not ready to self-organize outside our legacy system. By default, then, in the near-term we must rely on the speed limits, lane lines, stop signals and other rules of the road we have developed in a broadly ad hoc fashion in 100+ years of human-driven automobility. But once we have millions of AVs in motion at the same time and AVs are the norm not the exception, are the legacy forms of general self-organization that compensate for the limitations of human drivers still practical, or even desirable?

First, let’s consider a collection of AVs preparing to traverse a four-way intersection that has been stripped of all legacy markings and controls. The AVs cannot safely traverse such an intersection without deconflicting their planned maneuvers. Deconfliction is impossible without establishing priority. Two vehicles (AVs or human-driven) cannot occupy the same space at the same time. If two vehicles do attempt to occupy the same space at the same time, the result is collision. Therefore, some form of priority access to the dynamic space is required. The vehicle granted priority can simply maintain its current path plan through the intersection. The vehicle that yields priority must replan and must reject any new path that conflicts with the path plan of the vehicle with priority. 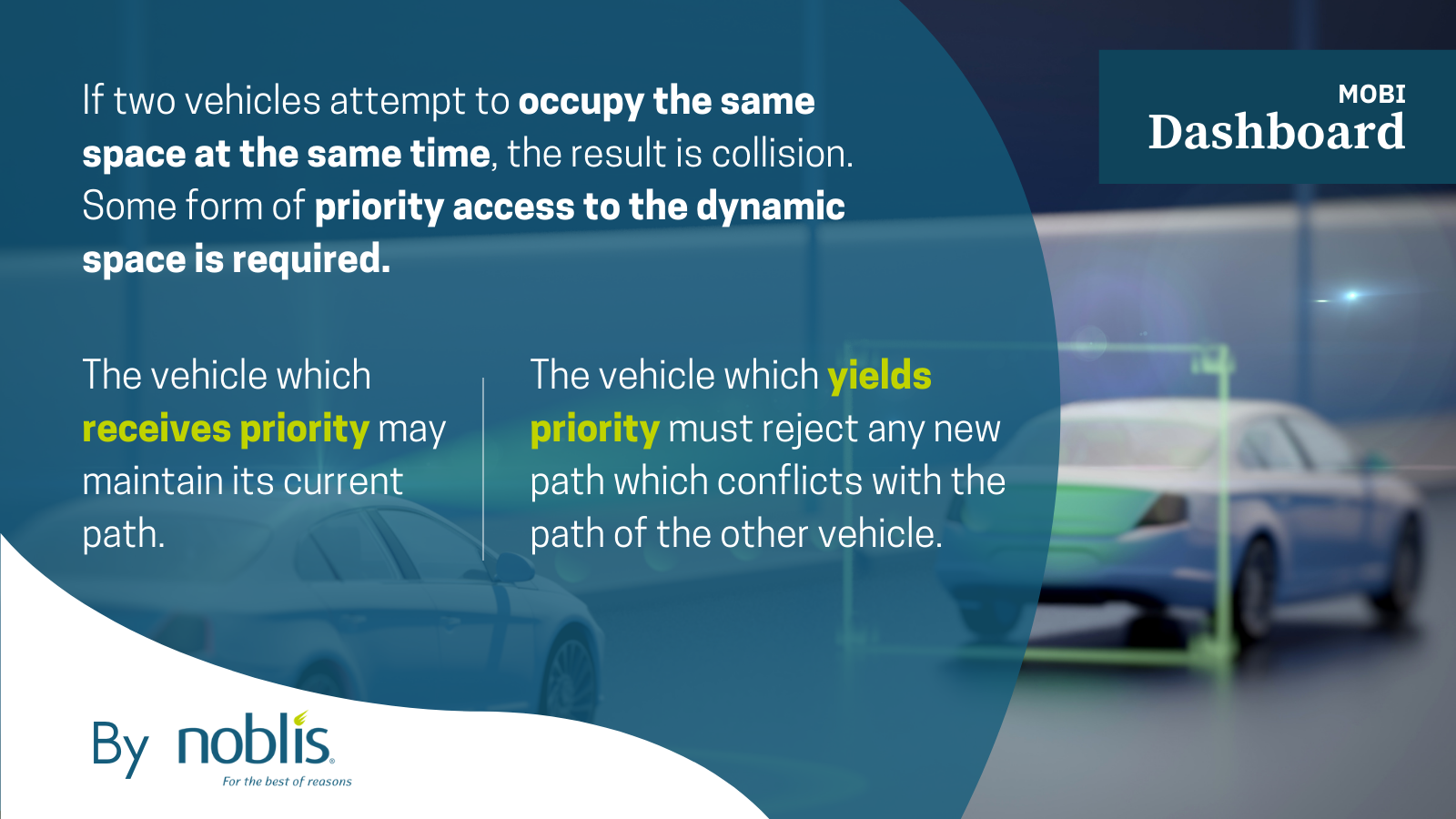 Further, priority is meaningless without trust. If a vehicle agrees (or is required) to yield priority, but then simply fails to yield, then a collision is likely to occur. In a system where vehicle adherence to priority mechanisms is unreliable, all vehicles will be required to move cautiously and ignore all signals of intent generated by other machines.

To address this problem, Noblis has proposed a broader ecosystem that includes transaction and trust management built on a decentralized blockchain solution. Vehicles engaged in collective maneuver planning require some way to share intent as well as earned trust. A trust report for all vehicles is managed externally by a consortium of entities facilitating the ecosystem’s transactions. We specifically use distributed ledger (or blockchain) technology because it is particularly well suited to the creation and enforcement of smart micro-contracts among machines.

Moreover, a critical element of creating maneuver transactions is the generation of value when vehicles negotiate for priority. To receive priority in a shared system, a vehicle must out-bid the other vehicles competing for that space. The resulting value can be distributed among all the entities in the ecosystem to ensure the alignment of operational efficiency and equitable ecosystem finance in ways that are simply not possible in a human-centric system. 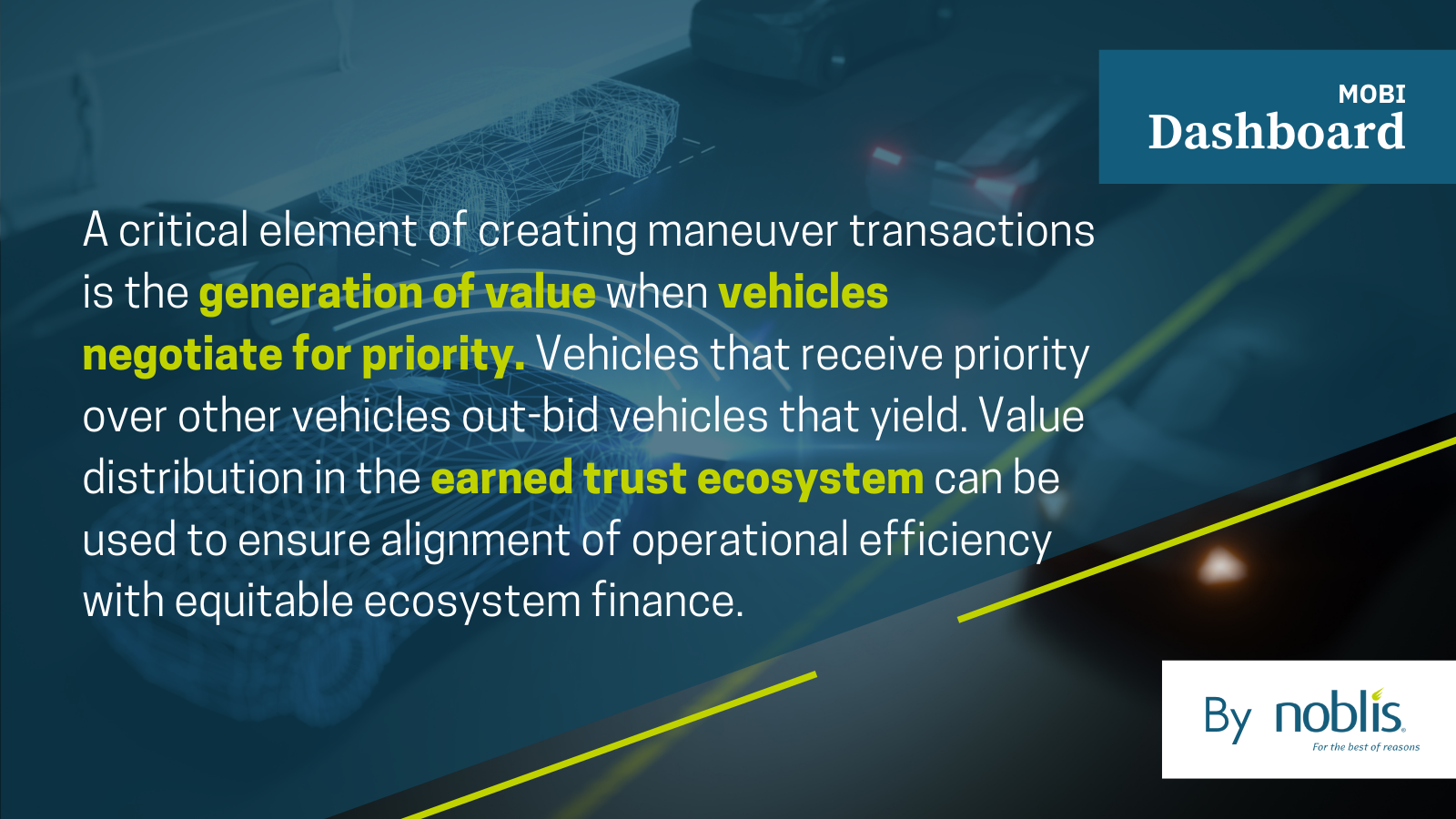 Value distribution in such a system may consider all parties facilitating aspects of the transaction, including yielding priority, providing, and maintaining the maneuver space, providing maneuver and sensor verification reports, providing reliable position and timing data, managing trust reports and recording transactions. Noblis is currently conducting research to examine the viability of such a system and its potential to address long-standing issues in equitable roadway system financial sustainability. For more on this topic, please see this recent publication.

We can extend this framework even further to consider fundamental considerations of liability. Note that when a collective maneuver plan cannot be completely executed, the result is that the smart contract among the participating vehicles is broken. This may be because the vehicle proposed a maneuver that it could not complete precisely within the dynamic space allocated within the plan. Or perhaps faulty sensors on one vehicle resulted in the creation of an inaccurate collective obstacle map.

Even if no collision occurred because of one or more of these failures, a comparison between the detailed maneuver plan and the executed vehicle trajectories enables streamlined assignation of plan deviation (resulting in reduced trust) or plan adherence (resulting in increased trust). Plan deviation informs fault – and therefore liability. Costs associated with a failed maneuver plan can be allocated to those vehicles found to be at fault, providing an incentive for vehicles to only propose safe and predictable maneuver trajectories and provide error-free sensor reports. 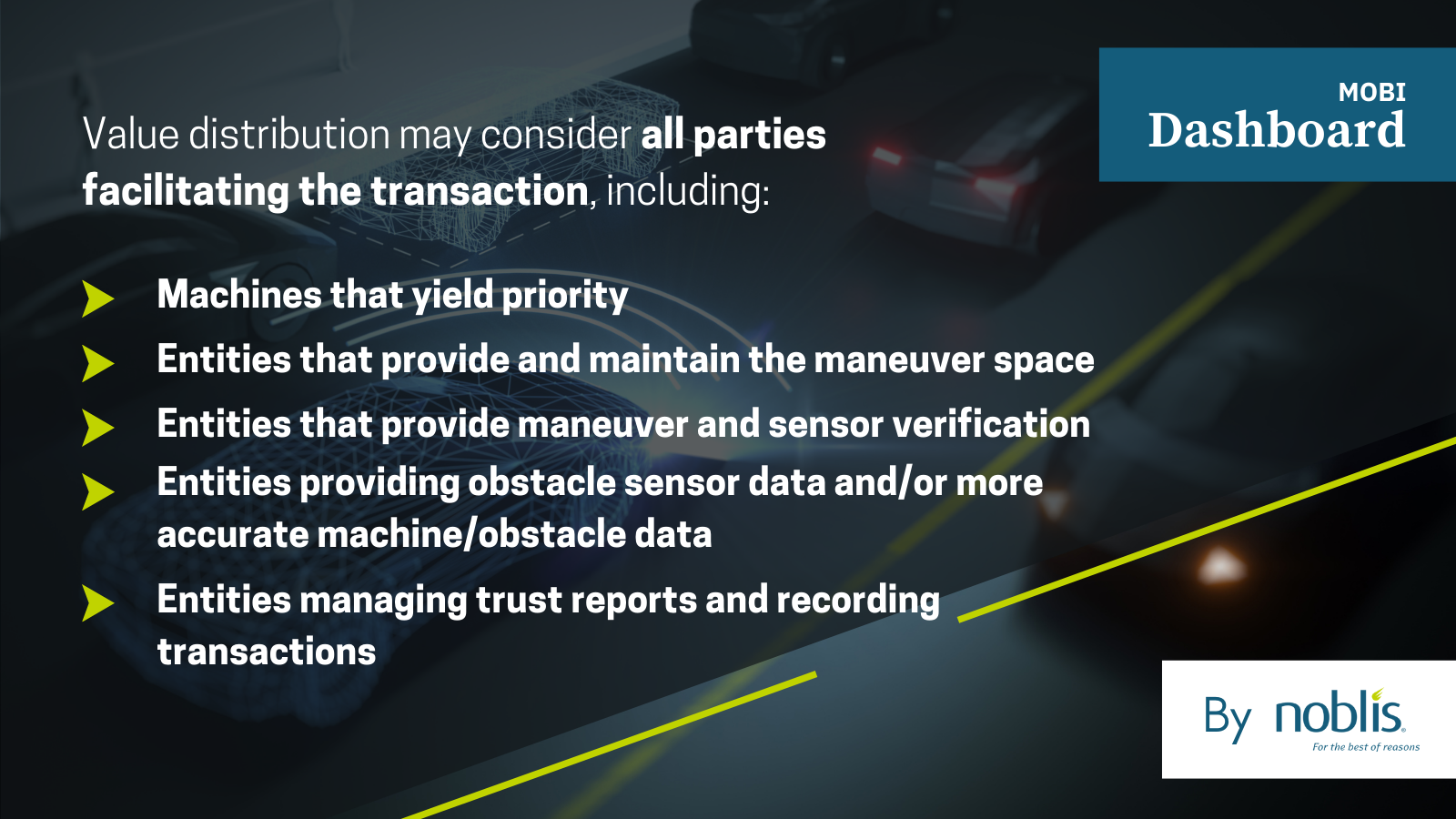 In our August MOBI Community lecture, we further explore the implications of maneuver transactions, both at the tactical scale and the system-level, along with the expected evolutionary response as the system incrementally progresses toward a safer, more efficient, more equitable and sustainably financed form.

At Noblis, we are conducting research around this and other related questions for our federal clients. Part of our job is to consider the impact of emerging technologies on the nation’s critical infrastructure system, and on potential opportunities to transform system safety, efficiency, and long-term financial sustainability. We have been exploring innovations at the intersection of vehicle automation, wireless connectivity and blockchain for some time. Our mission is one of the reasons why Noblis is an active and enthusiastic member of MOBI. An overview of Noblis research can be found here.